I have been working for two weeks on my second post on 1 Corinthians 11:2-16, weighed down trying to sort it out and desiring to accurately communicate God’s truth.  However this post will be a bit different from our usual exploration of scripture as it pertains to women.  I have written a tribute to my dear sister and mentor, Carol Wever, who is struggling through ALS and who is anticipating going home to be with Jesus in the not too distant future.  This week, Carol has taken a turn for the worse. I wanted her to be able to read what I wrote so I am sharing my tribute on this blog.

I think I first met Carol in 1978, when I was in the thick of rebellion against God.  Carol was a campus minister to students at Princeton University, where I was a junior.  Carol bravely took me on, though I occasionally insulted her, slammed her door and continued in rebellion.  Once she sent her husband into the meeting to try to talk sense into me. The time they invested in me finally bore fruit over the summer before my final year at college.  I have told Carol that she and Wayne were instruments that God used to save my life. Later, they chose my husband and me to work in the college ministry with them. I was marked by the way Carol did ministry, constantly adding in one more student, pursuing “lost sheep” like me, and cooking . . . we often saw the Lord open doors into students’ hearts just by making delicious food for them.

Perhaps you would say Carol was traditional in her views of men and women.  We have not always seen eye to eye when it comes to gender roles and the church.  But in application, Carol’s views on biblical roles for men and women never held her back from being a blessing to men and women in the church and on the campus.  She did not focus on what she was not supposed to do, but rather on all the possibilities that were open to her as a woman. That may sound clichéd, but it was not in reality.  Her formal teaching was given to women and children, tirelessly and without a trace of feeling her ministry was in any way less important than the teaching of men. Her informal teaching or encouragement reached everyone and anyone.

She was good at recruiting others to do ministry.   Her example spoke powerfully of the worth of serving.  She was willing to do janitorial work, sewing, painting, gardening and many other needed tasks for our local church.  She served many meals in her home where she worked hard to generate conversation about important topics, helping people to get to know one another and befriend each other for the glory of Christ.  She generated fun events at a rate that was exhausting to all the rest of us, because she was willing to pour her energy into occasions for the students to connect. And she prayed faithfully.

She wasn’t perfect of course.  She was human! I can’t speak for everyone, but I believe we all thank God for her, and love and respect her deeply.  And I yearn for a whole army of women willing to see that whatever God is saying to Paul through passages we wrestle with, He is pleased with our service and generous with opportunities to courageously testify about the wonder-working power of the Blood of Jesus Christ, so that many are saved and grown up into mature faith.

I love you, Carol. 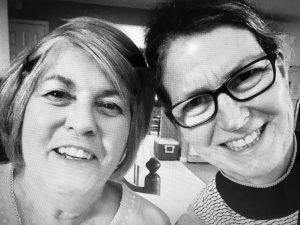